The Lion Sleeps Tonight (but I don't)

Whew, been away for a loong time, but I've been getting a lot of interesting projects going.  Hopefully a few of them will be successful.

Sorry about that, but I might as well confess I have some weird anxiety about posting on this blog.  I don't ever know what to write about, and i probably care way too much about choosing the right words to say.  My brother wrote about the same thing & gave it a name on his blog here.  And what happened this time was a bunch of real life hit me and distracted me and the longer I have gone without posting something, the more important I want the next post to be (so I don't just show up after 5 months and say 'hey folks, I saw a weird rock today, see ya..")  And since I want the post to be big and significant I feel like it's too overwhelming and requires too much time that I can't budget, so I procrastinate.  For instance, I have just put my sculpture away so i can't work on it and I am cranking this out at 6 in the morning so I can get to bed, which will probably be more like a 4 hour nap before I spend all tomorrow on something else. It's one of the exciting projects I will hopefully reveal soon, when I figure out the best way to do it.

What I'm usually doing most of my days is sculpting for clients like NECA and Hallmark, and those are projects that I cannot show until they are officially announced.  This means I am spending the large majority of my time doing something I can't blog about.  There have been a few cool ones during my time away that I believe I can show now, such as the Boomer from Left 4 Dead.  Also some uncool ones, like Twilight.  Sorry if you're a fan, but ugh.  I do feel I did a good job capturing the realism at a small scale (It is an ornament for Hallmark), so I still have some pride in that piece.  But the really cool ones are coming out for Christmas this year;  Lion-o and the Christian Bale batman.

What Glyos/Armorvor fans will care the most about though is the recent head I wedged into my schedule, which is a lion with kind of a ceremonial helmet.  There is quite a zoo-ful of animal heads building up, with Marty making cobras and beetles and hammerhead sharks, even a strange vintage wolf-man.  But the lion head is the second head I've done, third if you count the robot head that doubles as a backpack.  I just made up that robot head to go with the body and I'm glad that Matt Doughty liked it.  This lion was a lot more of my design than the wolf head, which was based pretty faithfully on Matt's design (His 2-D concept art is very fun to work off of.)  This time I started on my own but still tried to capture the Glyos style that would match the wolf and other heads.  Matt gave me some feedback on the helmet and I finished it up, kind of making a loose variation of his art.  A lot of Glyos fans seem to consider the wolf head and the armorvor body to be detailed, but compared to my usual work they are less about detail and more about deep trenches and separation, with strong, smooth and interesting shapes.  This has been a fun discovery for me to work in a style that embraces the "toy-ness" appeal, and not being able to use hyper-detail to impress forces me to really make the shapes pleasing on their own.  I may have some hyper-detail, micro projects to reveal here soon as well, hopefully, because micro work is my fave.  I might even try to get some sort of online nickname with micro in it.

Anyway, Here are some pictures of the lion's sculpting process. 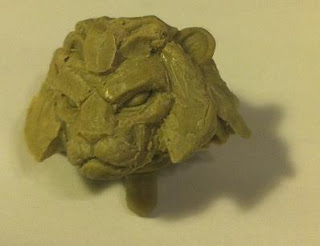 I was sculpting the mane shorter so that the hair wouldn't get in the way of the neck twist, but Marty and I didn't like the "pageboy" haircut. 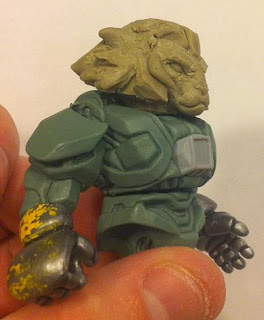 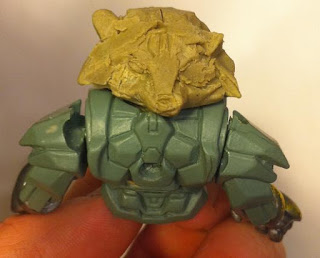 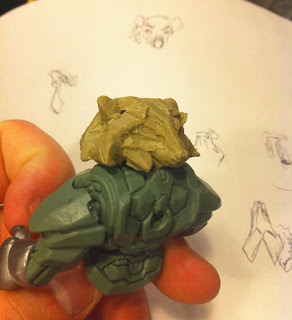 Here I was experimenting with making a second face on the back of the head, from a bear to a boar to what settled on a raccoon.  (the flow of the pageboy mane went into the cheek fur of the raccoon well).  This ended up being too weird and restrictive to work, and I am glad I dropped it to just focus on making the lion cool-looking. 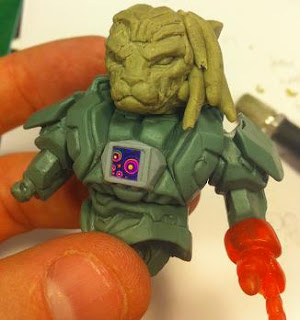 And cool started happening immediately when I put on these "dreds".  Kind of reminds me of predator.  I realized if I made the hair blowing and shifted forward just right, it can still turn at the neck even though the hair seems to go well below the chin. 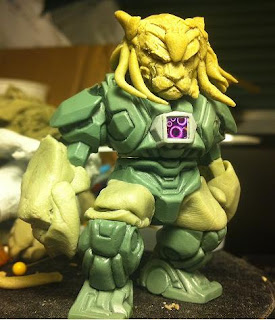 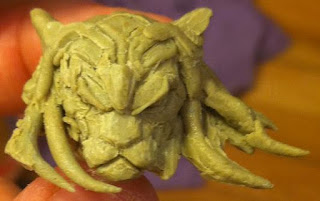 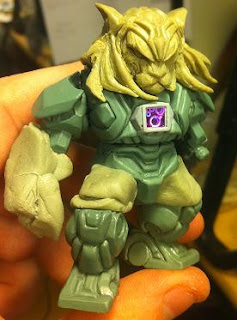 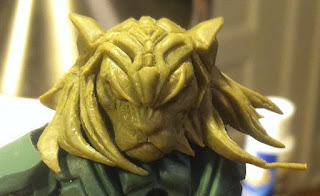 Basically the finished product, just needs some cleanup (especially in the trenches).  The extra clay tube sticking off the end of the hair was a sprue idea, to let any possible bubbles work their way out, but it wasn't needed.

Hope you liked the lion, because I've got some more heads coming to you real soon!!

If you are interested in getting a lion head, let Marty know by posting about it here: http://www.octobertoys.com/forum/viewtopic.php?f=29&t=4976&start=2640

Thanks a bunch, guys!